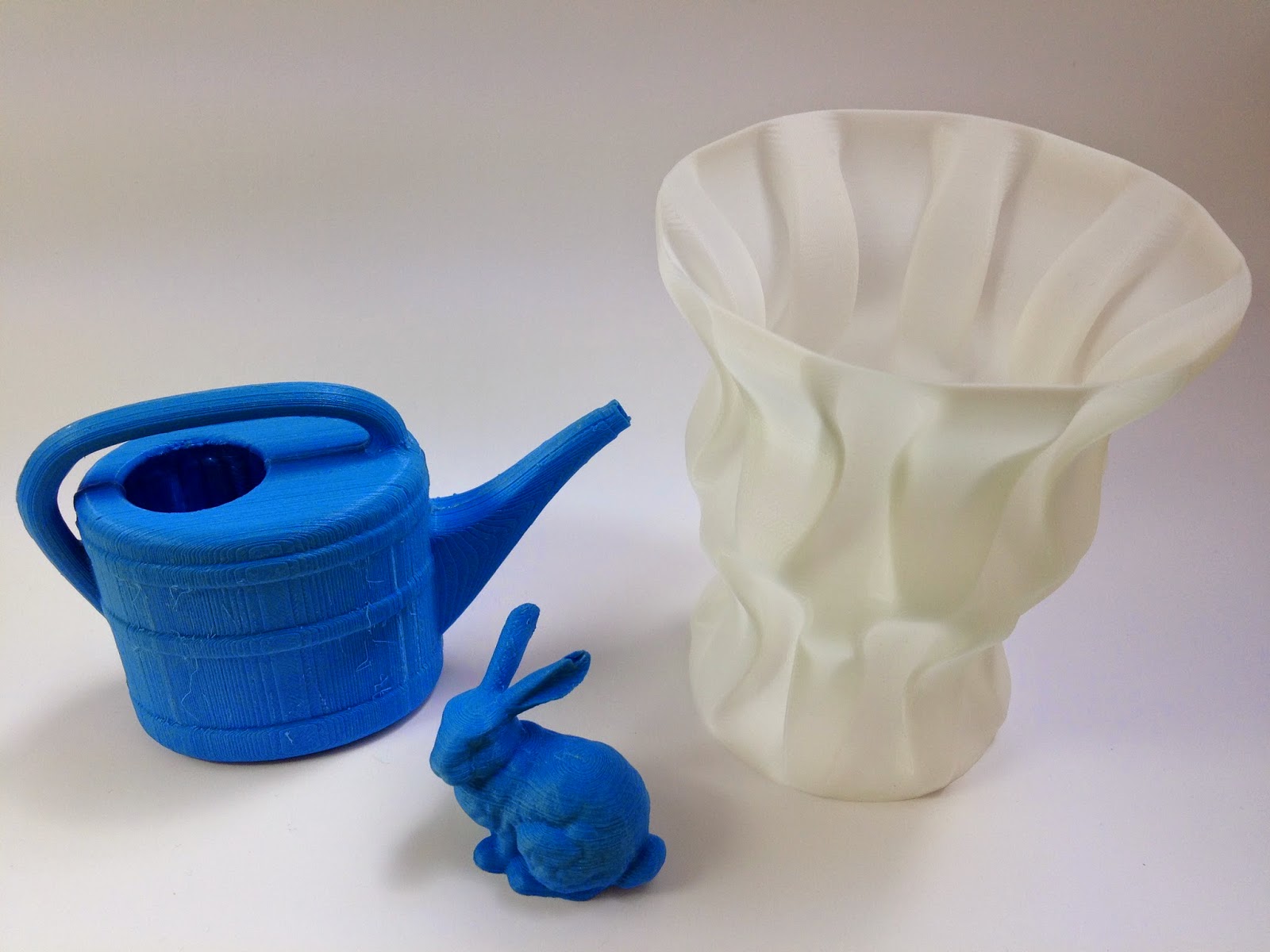 Looking at sites like Hackaday and Instructables, there is an increasing amount of projects that make use of 3D printers. And it is incredible to see how good the print quality has become in the past few years. Because of this I finally decided to get my hands on a 3D printer myself.
When I first found out about the BQ Hephestos I expected a catch somewhere. It offers a large print bed (215x210x180mm) and an LCD screen for just 500€. This may not look especially cheap compared to other sub-500€ printers like the Printrbot simple metal. But those are hard to come by in Europe and including taxes they often cost the same as high end printers.
The Hephestos is an open source 3D printer based on the successful Reprap Prusa i3 that includes several improvements added by BQ, for example a completely redesigned extruder. BQ itself is a Spanish smartphone and tablet producer whose robotics and innovation department, among other things, develops 3D printers.

The kit was ordered directly from the manufacturer and I received the shipment short after. BQ really put a lot of effort into the design and packaging of the parts. There is a box corresponding to each step in the manual which makes it easy to keep track of the countless screws and bolts. The manual itself is nicely done as well. There is a picture with detailed descriptions on every page, it kind of feels like building a Lego kit. If the manual is not enough there is also a built video on BQ's YouTube channel in which the printer is assembling itself. It must have taken someone days to animate that.
The parts themselves have a decent quality and are easy to assemble. A few tools are already provided, e.g. different size wrenches and needles to clean the nozzle. The screws are fitted in the plastic parts using a soldering iron so sanding was only needed on some of them. One issue are the linear bearings. They are extremely noisy and have too much friction, I was lucky to have ordered some cheap bearings from eBay a few month ago so I could use those instead.
The extruder comes pre-assembled and is the same one used in the Witbox, BQ's bigger 1600€ printer. It has a powerful cooling fan which has proven to be very effective. The Hephestos can easily print steep angles and bridge larger gaps without ruining the print. I clogged the nozzle once because of too low temperatures but that was simple to remove.
The electronic components seem to be of good quality as well. They consist of an Arduino Mega with a RAMPS 1.4 shield, 5 motors and drivers, endstops, an lcd panel and a power supply.
It took me about three days to assemble the printer and it makes a very stable impression. Normally you would need to shorten the motor cables to get a clean wiring but I was too lazy to do that. I later added a little switch to the z-axis endstop to turn the power on and off without pulling the power cord. 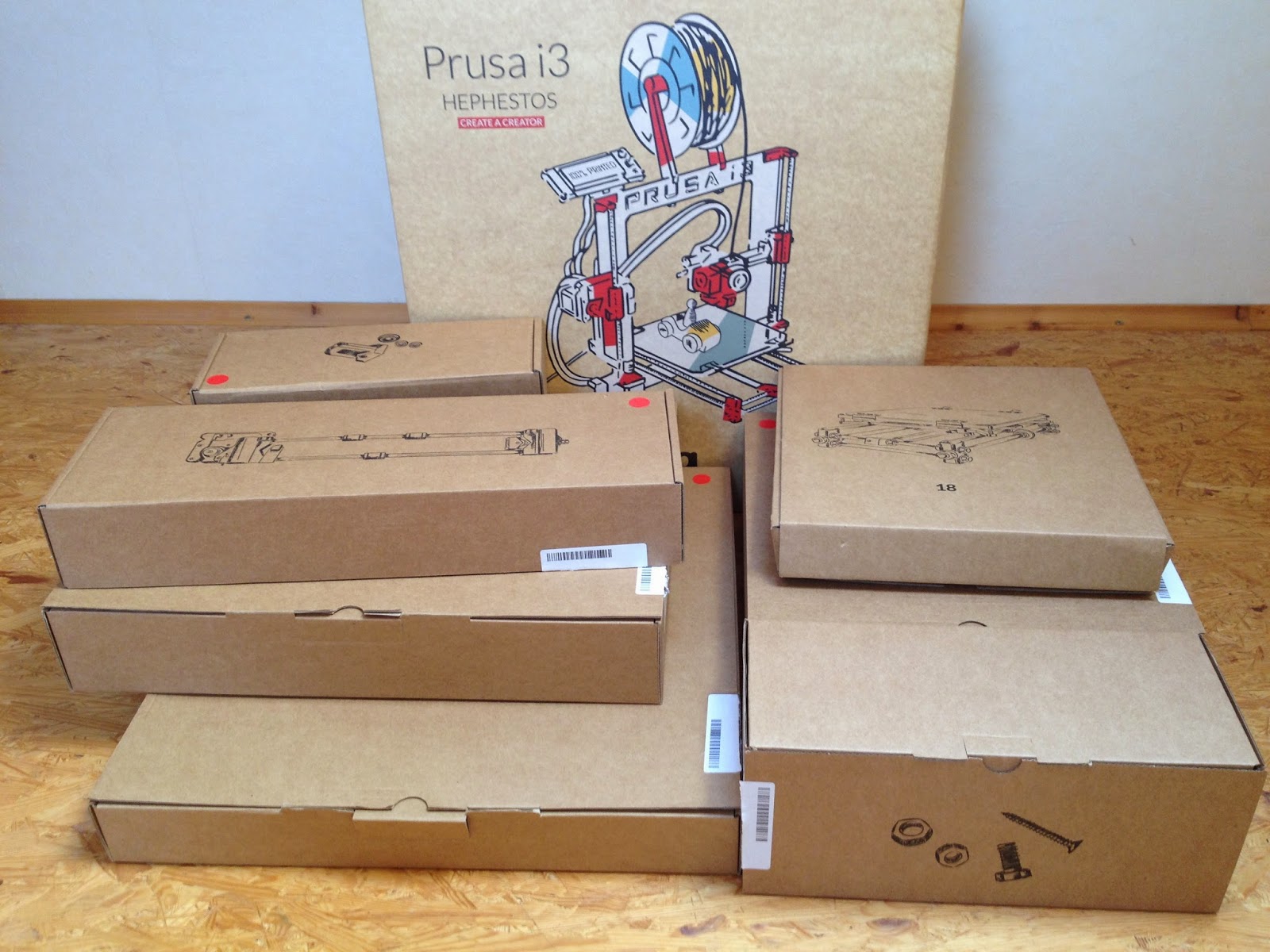 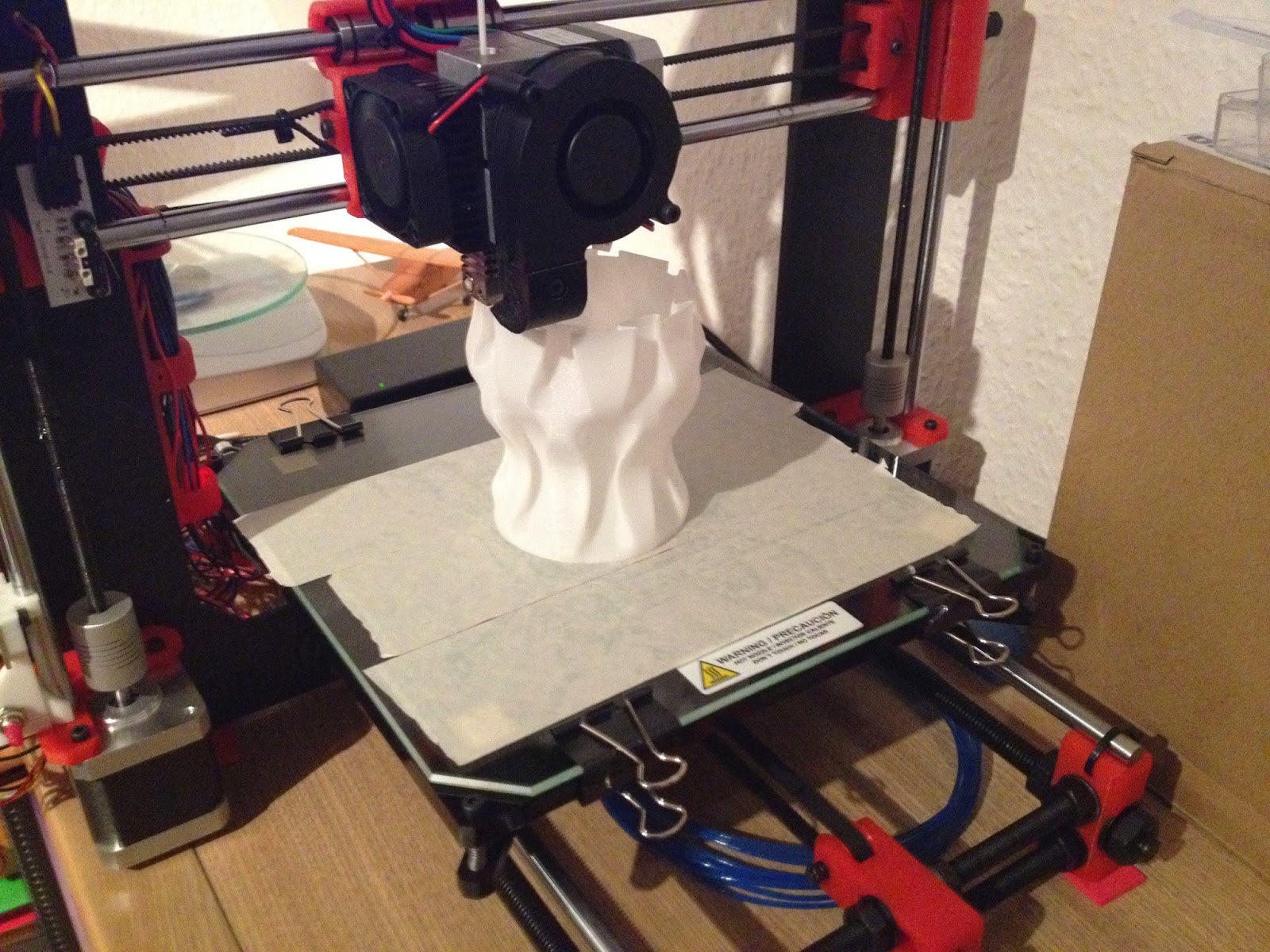 While many 3D printers include their own software or a customized version of Repetier host, the Hephestos only comes with a set of Cura configurations. This would be perfectly sufficient if there would not be apparent errors in the code: A Cura configuration file includes the start- and end gcode. This is the code for priming the extruder and for moving it out of the way after each print. With the file provided by BQ the z axis will move up 200mm after printing. Now the Hephestos cannot even move that far up so it will hit the upper end and possibly destroy itself if you can’t pull the plug fast enough. Secondly the coordinates are not absolute but relative in BQ's code. This means that instead of retracting the filament a bit after the print, it will rewind the entire length of filament you printed. Those errors are simple to fix if you already know about 3D printers but if you have no prior knowledge you will eventually end up destroying the printer.
At least the Marlin drivers provided are working fine. The only complaints I have are the strange LCD menu where you need to tap through 6 submenus to move the axes and the bad temperature control, which is sometimes 5 degree off during prints.

You can download the fixed Cura profile with improved purging here:
https://www.dropbox.com/s/ywu9uwuzllz1jon/CTHephestosCuraProfile.ini?dl=0

There was only little calibration necessary to make the first print and I was really impressed by the quality. At a closer distance you can see that the printed parts are not made by a high end printer but you have to keep in mind that this is practically the cheapest 3D printer you can buy in Europe at the moment. The prints are smooth and have acceptable tolerances which should be more than enough for everyday objects.
I am currently printing on painter’s tape on which the plastic sticks very well. Previously I have been using a glue stick on the glass bed but the undersides of the prints came out very rough that way. Hairspray did not work for me as well, maybe it was just the wrong brand.
The print quality strongly depends on the filament. For the first few weeks I have been using blue PLA from BQ which is sold for 20€ per kilo. This is really cheap and unfortunately you can see that on the prints as well. Later I switched to white formfutura PLA which costs 30€. As you can see in the pictures below the layers look much more accurate and smooth.

The BQ Prusa i3 Hephestos is a great 3D printer if you are on a low budget and don’t need to print highly detailed objects. With its big print bed and solid construction it is a great printer for hobbyists and tinkerers.
I’m not sure if the printer is suited for total beginners like BQ is advertising it but as it is an open source design you can profit from the reprap community and many questions have already been answered on their forums. You can download every printed and non-printed part from BQ's github page and many people already have made their own additions on thingiverse. 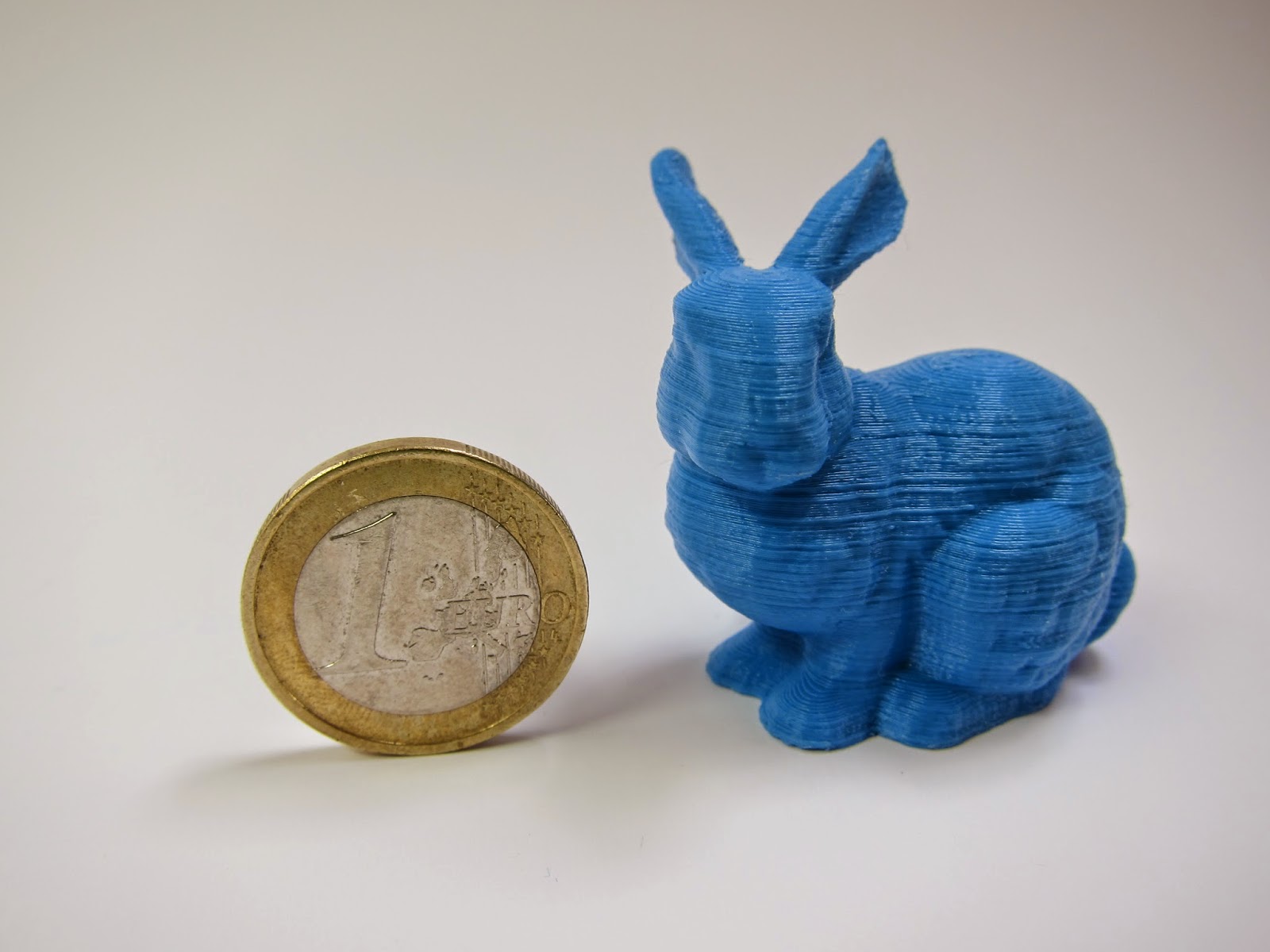 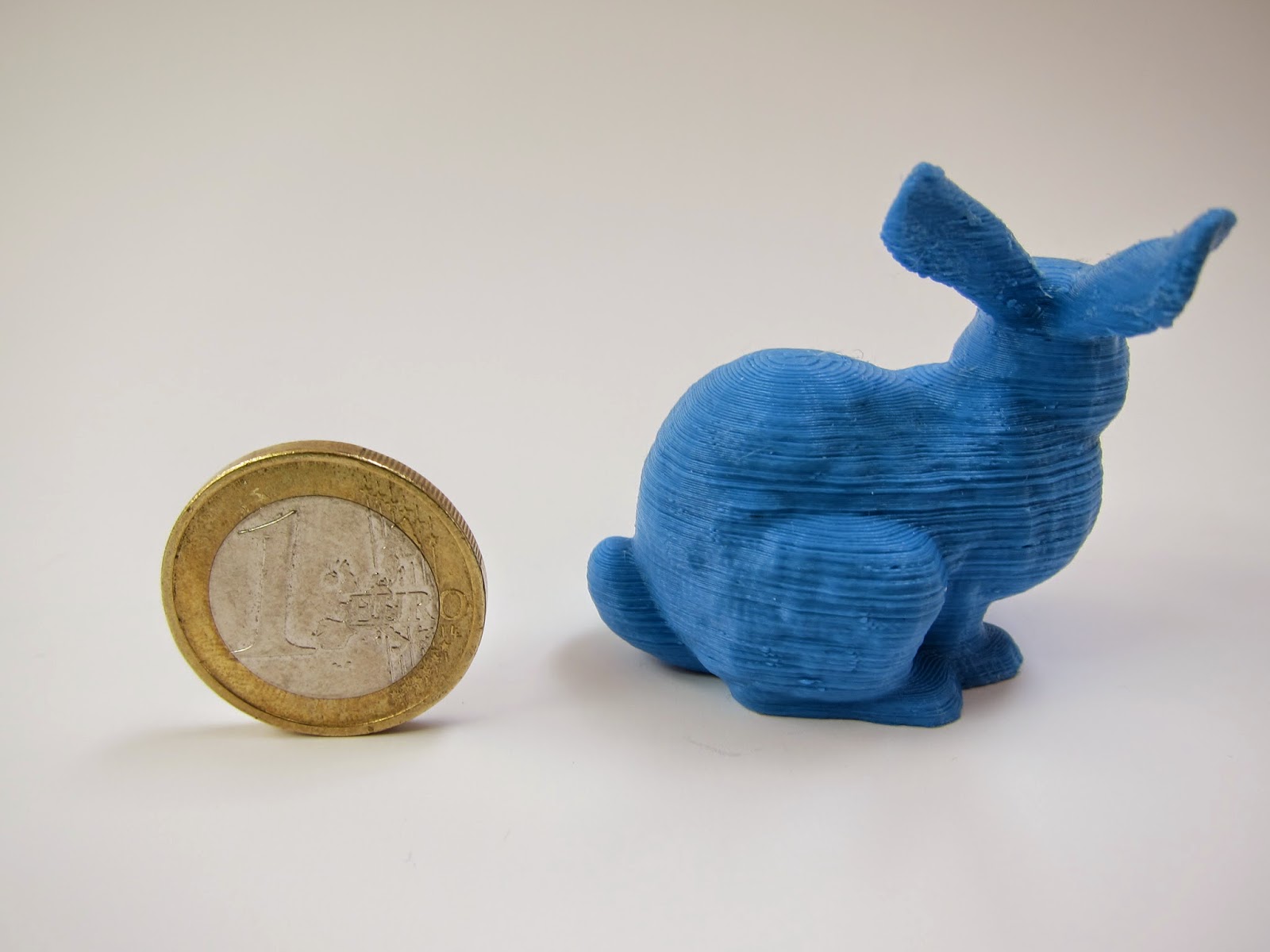 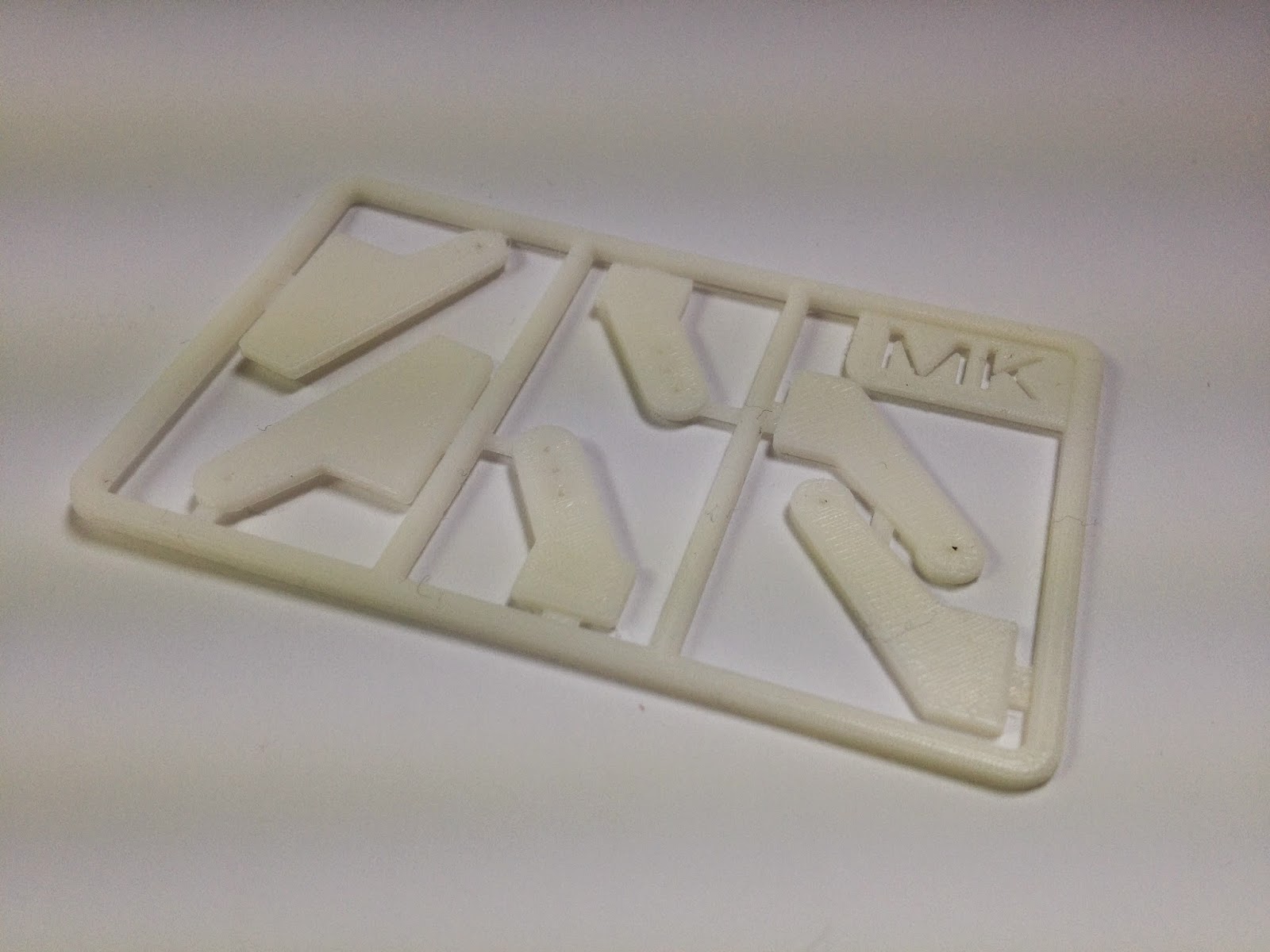 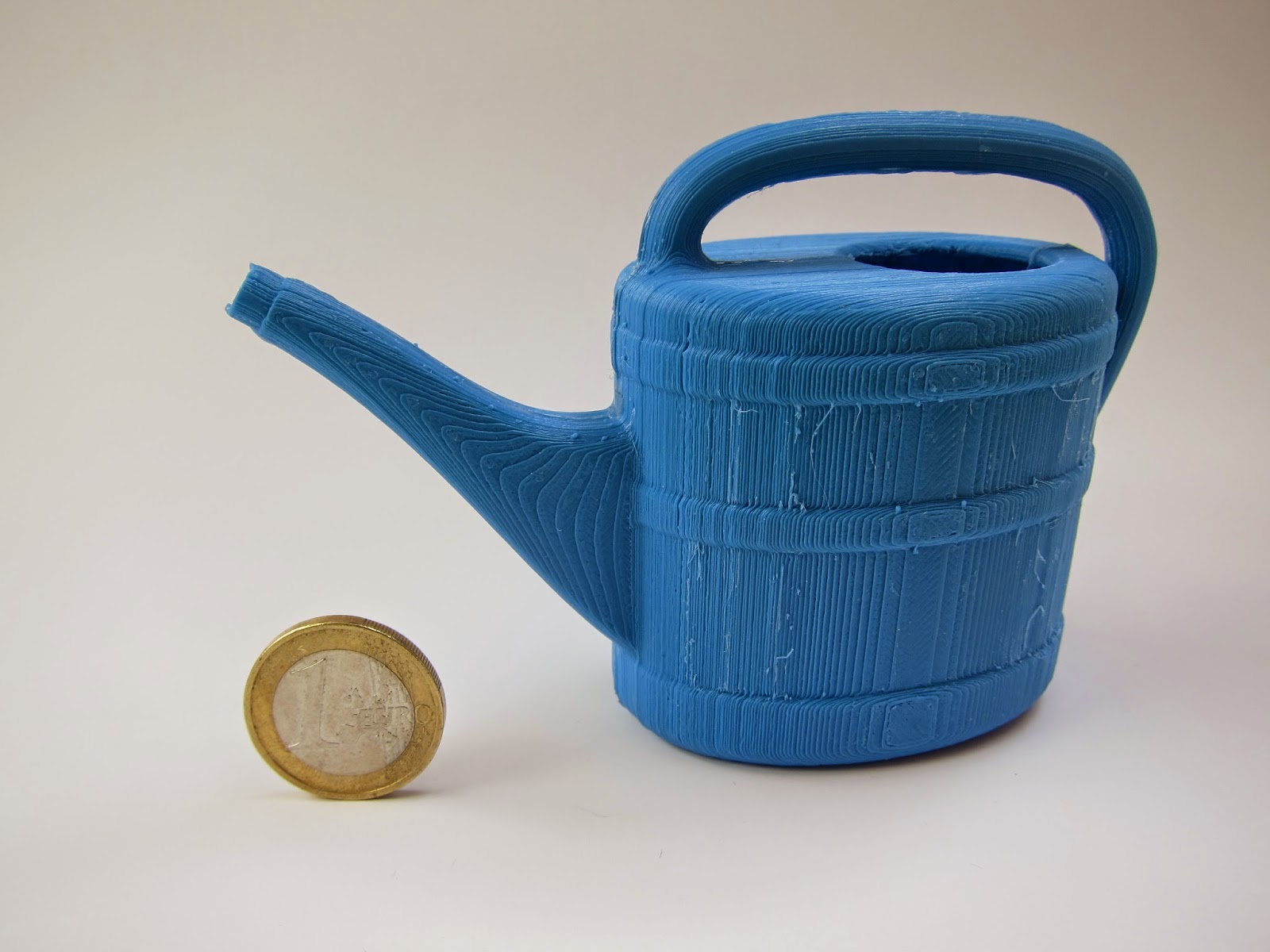 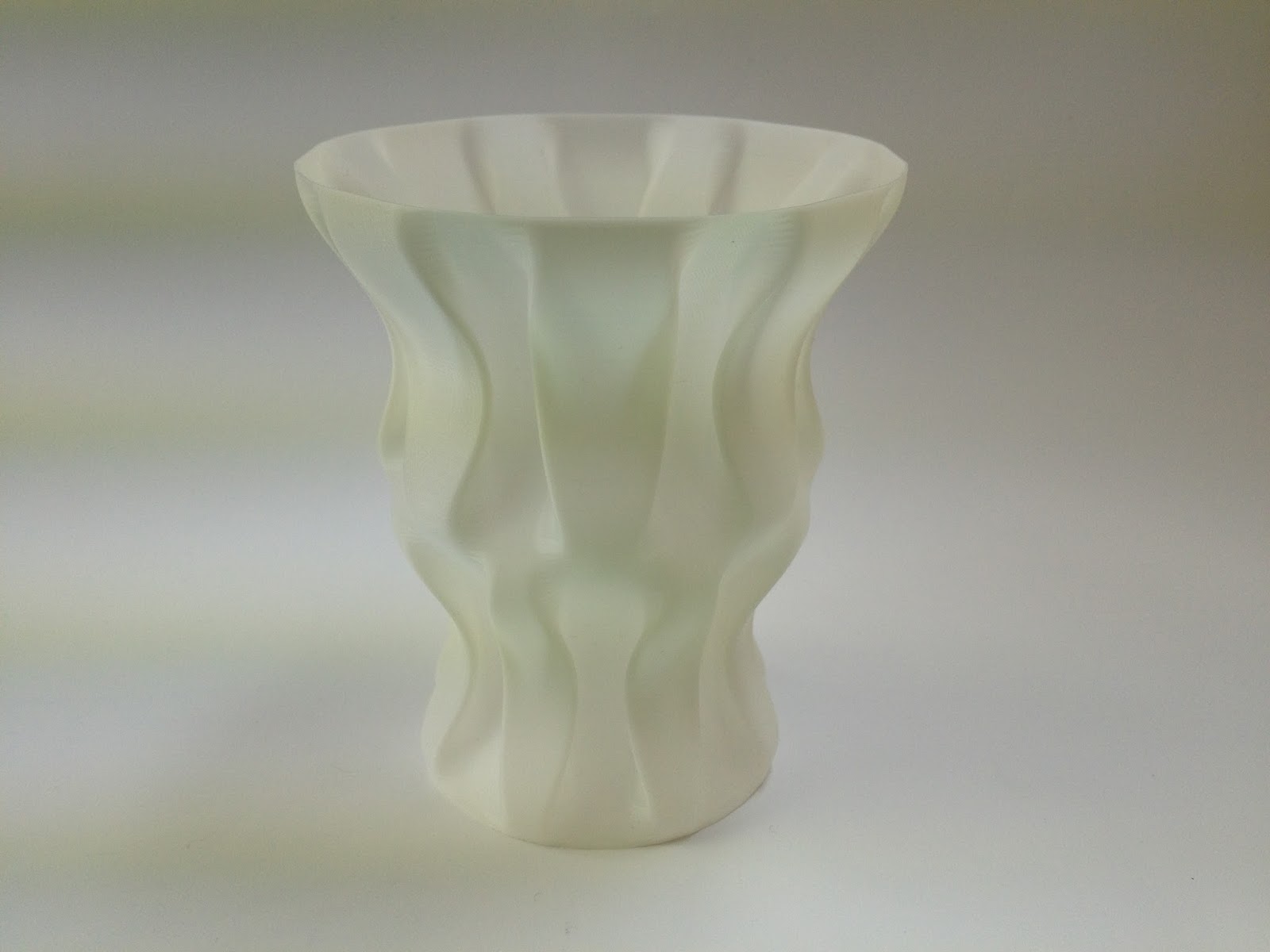 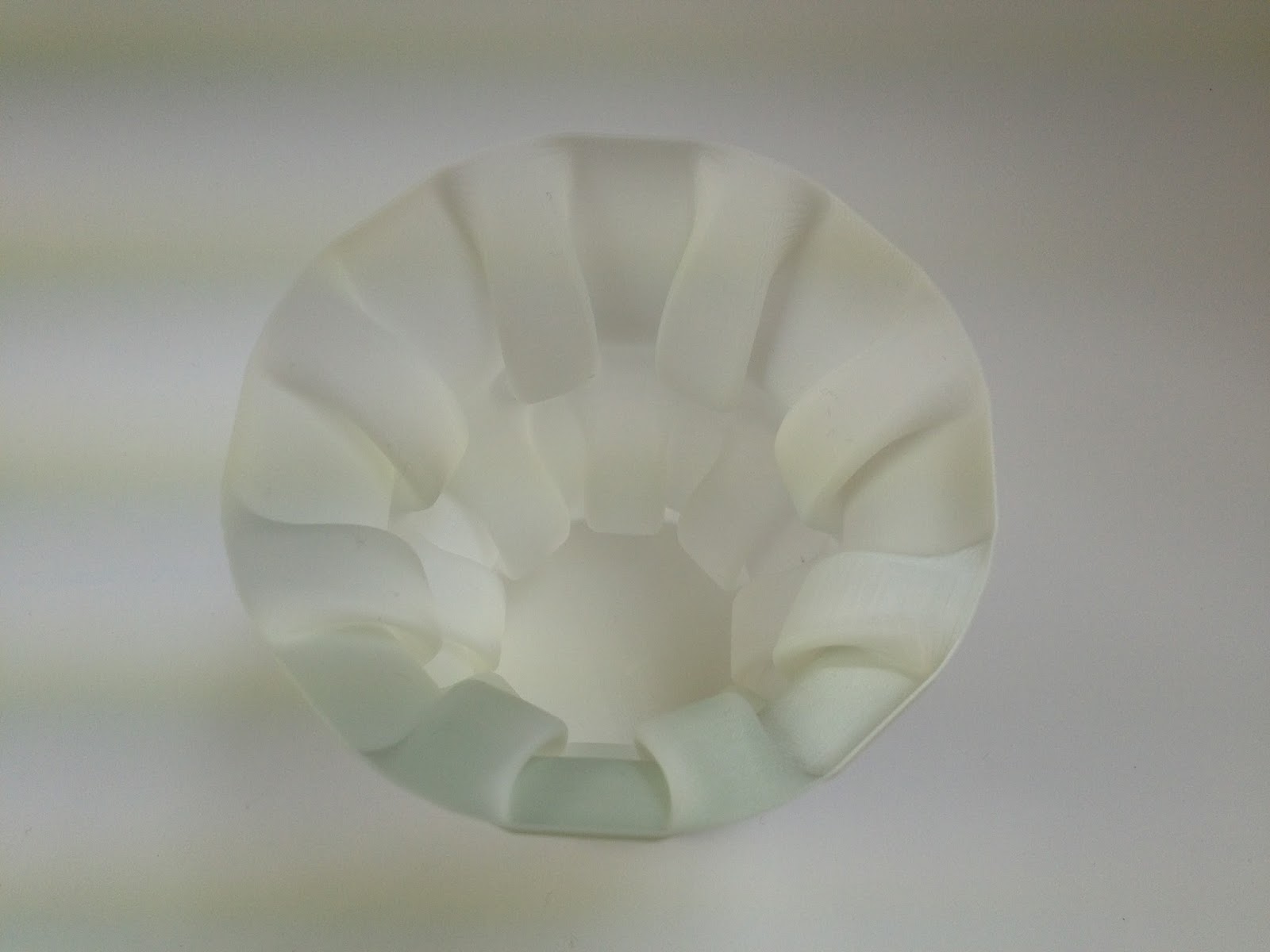 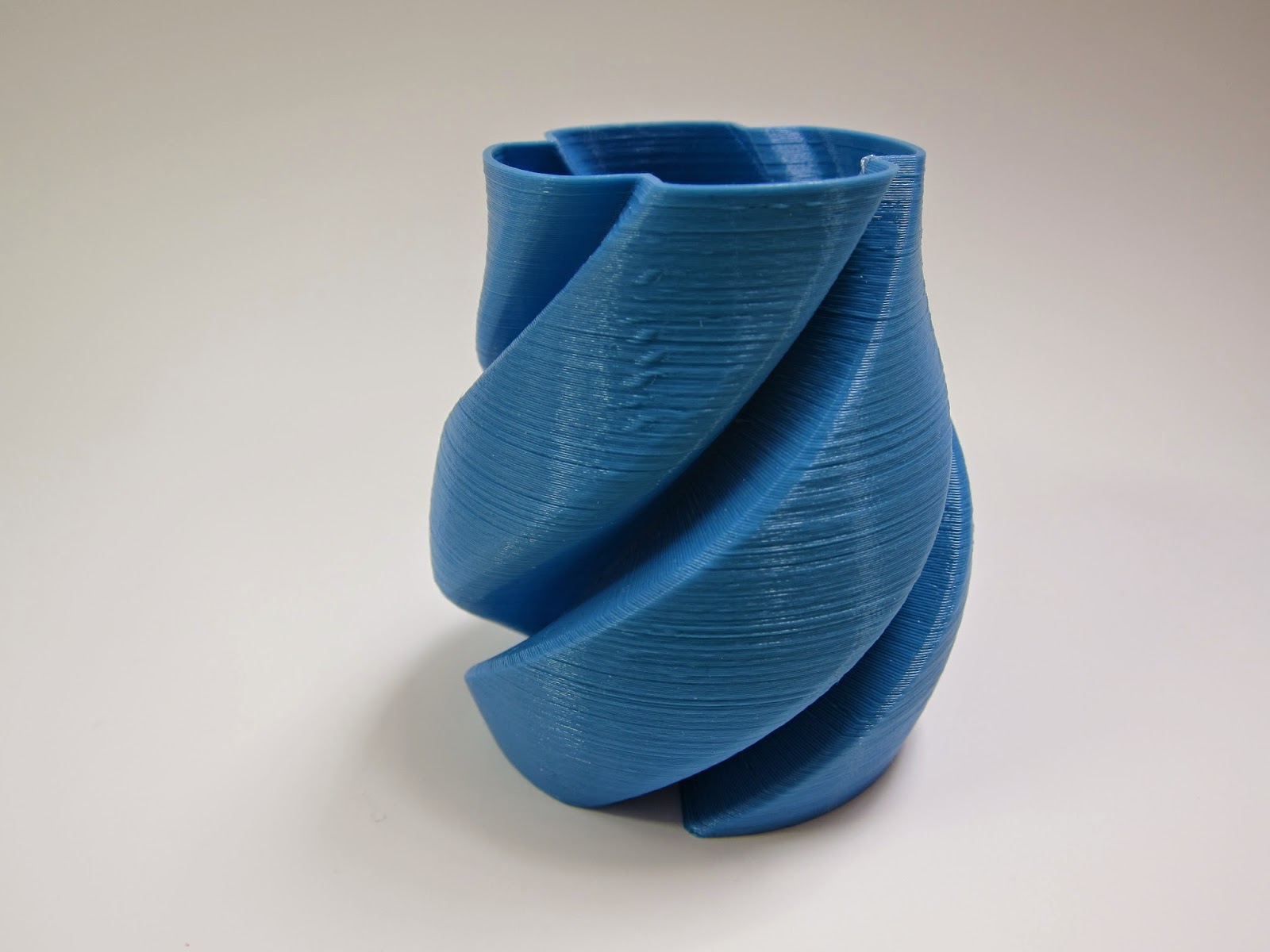 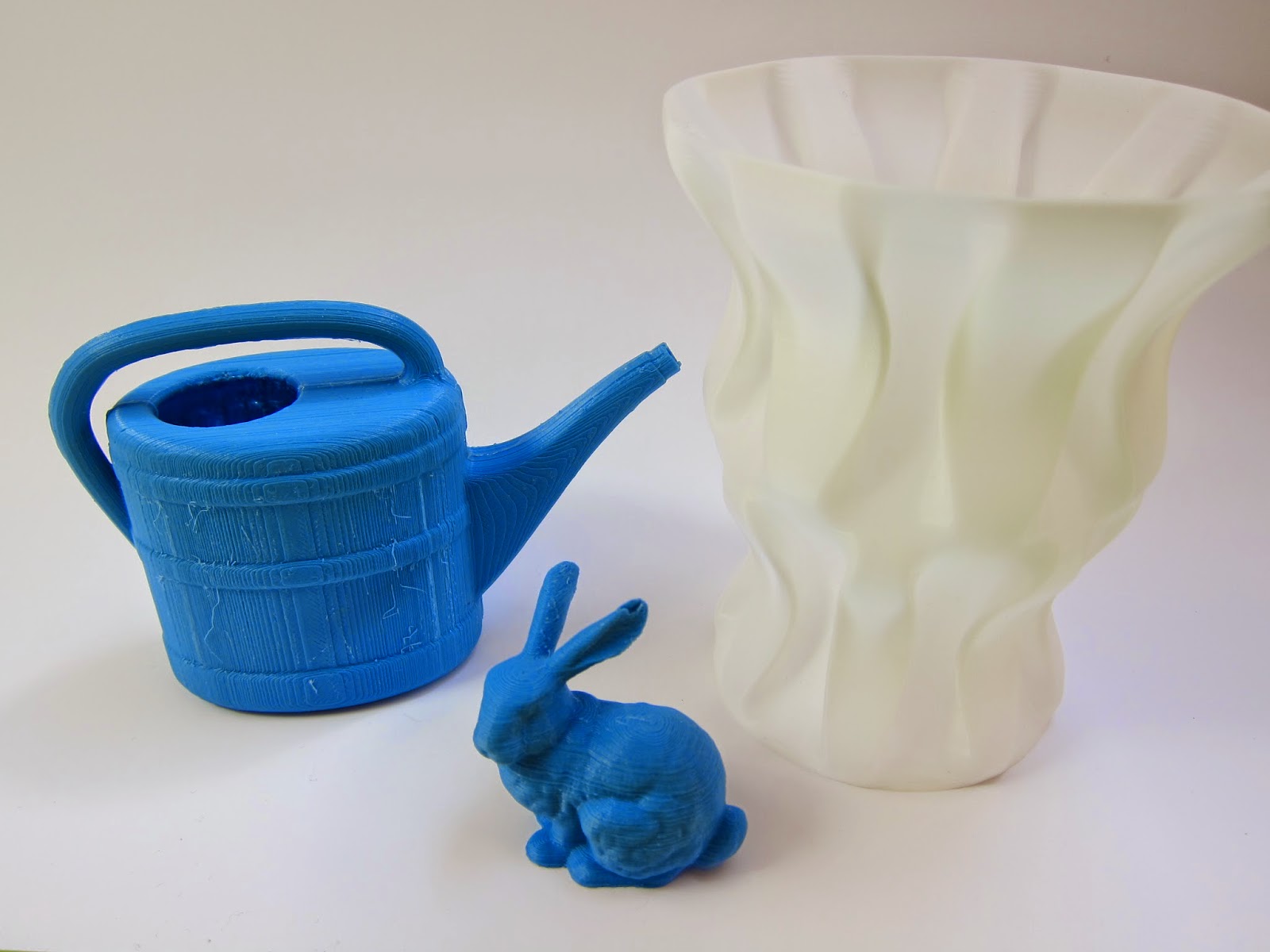